Enroll in Export University for May 23

Leader of the Belarus trade delegation Aliaksandr Zabella, Chairman of the Belarusian State Food Industry Concern and Tatiana Sitnikava, Chief of the Foreign Affairs Sector for the Mogilev Region of the Belarus Chamber of Commerce and Industry address Arkansas government and commercial leaders at the World Trade Center Arkansas.

May 8, 2017 – The World Trade Center Arkansas welcomed an inbound Belarus trade delegation on Tuesday, May 2.

The purpose of the inbound Belarus trade mission was to explore Arkansas as a bilateral trade partner and to expand trade and educational exchange between the two regions.

“Our high level delegation’s visit to Bentonville and Rogers last week was very successful,” said Pavel Schidlovsky, the charge d’Affaires for the Embassy of Belarus in Washington D.C. “The World Trade Сenter Arkansas has developed an excellent program tailored to the needs of the members of the Belarus trade delegation. At the seminar, the delegation made presentations and discussed the possibilities of doing business with Arkansas business leaders, professors, representatives of Senators John Boozman and Tom Cotton as well as Congressmen Womack.” 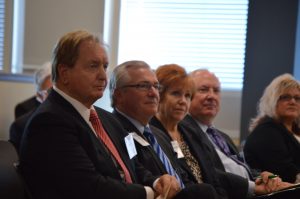 MEMBERS OF THE DELEGATION

Members of the Belarus trade delegation included government and commercial leaders like Aliaksandr Zabella, the chairman of the Belarusian State Food Industry Concern; Pavel Schidlovsky, the Charge d’Affaires of the Embassy for Belarus in Washington D.C.; Viktar Nekrashevich, the deputy chairman of the Mogilev Regional Executive Committee; Henadz Chorny, director general for the Mogilev branch of the Belarusian Chamber of Commerce and Industry; and Geert Visser, honorary consul for the Republic of Belarus in Houston.

Multi-industry leaders from the food industry, the textile industry and the interior design industries were present for this mission. Companies such as Kommunarka and Slodych, some of the largest confectionaries in Belarus, as well as Minsk Krystall, a distilled beverages production company and Mogotex, a manufacturer of advanced textiles who made suits for American astronauts gave presentations at an interactive seminar held at the World Trade Center Arkansas in Rogers.

OTHER MEETINGS IN ARKANSAS

In addition to the interactive seminar at the World Trade Center Arkansas, the delegation traveled to other parts of the state. Viktar Nekrashevich received the Key to the City of Bentonville on behalf of the delegation from Mayor Bob McCaslin. In Little Rock, they met with Governor Asa Hutchinson and the Little Rock Regional Chamber of Commerce.

For the past ten years, Belarus trade has been characterized by the fast growth of trade turnover and services. This is caused by high rates of economic growth and increases in scientific and technical potential. A diversification of Belarus trade through economic relations with other regions of the world can also be attributed.

The top five exports of Belarus are Refined Petroleum, Potassic Fertilizers, Cheese, Crude Petroleum and Delivery Trucks. The top three export destinations of Belarus are Russia, the United Kingdom, and Ukraine. The top import origins are Russia, China, and Germany. In 2015 Belarus exported $26.1B, making it the 67th largest exporter in the world.