April 16, 2018 – The Arkansas District Export Council and the World Trade Center Arkansas surveyed state companies to assess the potential impact of the anticipated steel and aluminum tariffs on their businesses. The center and council released the survey on March 15 and used the results to inform lawmakers and government officials in an official report. A summary of the official report can be viewed here.

“Exports of American goods and services constitute a critical foundation of the U.S. economy and are a key component of economic growth both nationally and in Arkansas,” said Lenka Horakova, chair of the Export Council. “In addition to specific information, we asked Arkansas businesses to communicate their thoughts, concerns and observations about the proposed tariffs in order to ensure those views are heard by our elected officials and trade negotiators in Washington.” 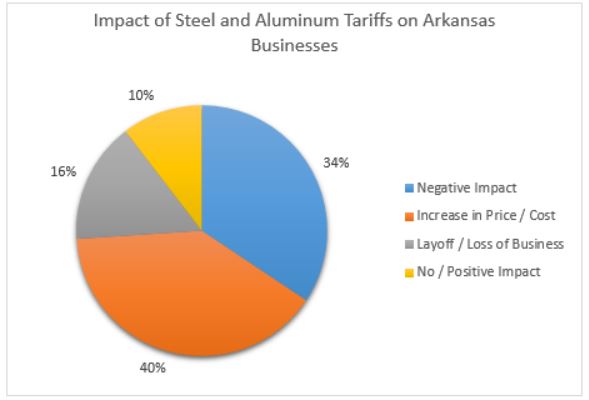 Eighty-four percent of these same companies indicated that their products use steel or aluminum in their supply chain. Forty-three percent of the companies surveyed stated that their primary reason for importing steel or aluminum articles was that these articles are in short supply in the United States. Approximately 13 percent say the articles they use are not available or in short supply in the United States.

“Based on these responses, Arkansas companies are saying that the tariff impact would result in a burden for them,” said Melvin Torres, Director of Western Hemisphere Trade for the World Trade Center Arkansas.

The companies were comprised of four groups based on their position in the supply chain: component fabricators; manufacturers and agriculture producers; end users and services; and retailers, suppliers and distributors. China, Mexico and Canada are the top three countries from which these companies import steel and aluminum articles, according to the responses.

“The tariff negotiation with China and the NAFTA negotiations become more critical for Arkansas, based on these responses,” Torres said. “This is because the majority of companies that responded indicated that China is their biggest supplier and because one third of all Arkansas exports go to Canada and Mexico. These trade relationships directly support more than 110,000 jobs in Arkansas.”

Torres, who also has experience in international banking and finance, observed that there is also a potential for the tariff impact to result in uncertainty in the financial services sector.

“This is always an economic concern,” he said. “As an example of the supply chain effect in light of the high response rate from the construction and real-estate industries, the increased costs to this sector could potentially translate to consumers. This combined with the current increase in prime interest rates for home and construction loans could create an environment in which loan availability is reduced. The impact to the financial services sector could potentially create an economic ripple effect similar to 2007 and 2008.”

Torres also observed that of the Arkansas companies that elected to respond to the survey, most of them rely more heavily on steel and aluminum from China compared to the rest of the United States.

“According to Department of Commerce reports released earlier this year, Canada is shown as the number one exporter of steel and aluminum to the United States,” Torres said. “This represents 17 percent of steel imports and 43 percent of aluminum imports in 2017 for the entire U.S., whereas China represented just over 2 percent of steel and 10.5 percent of aluminum imports. Overall, the top five suppliers are Canada, Brazil, South Korea, Mexico and Turkey. Furthermore, U.S. reliance on imported steel is declining.”

For more information about the survey or the potential tariff impact, contact Melvin Torres, director of western hemisphere trade at the World Trade Center Arkansas at melvint@arwtc.org or call 479-418-4822.