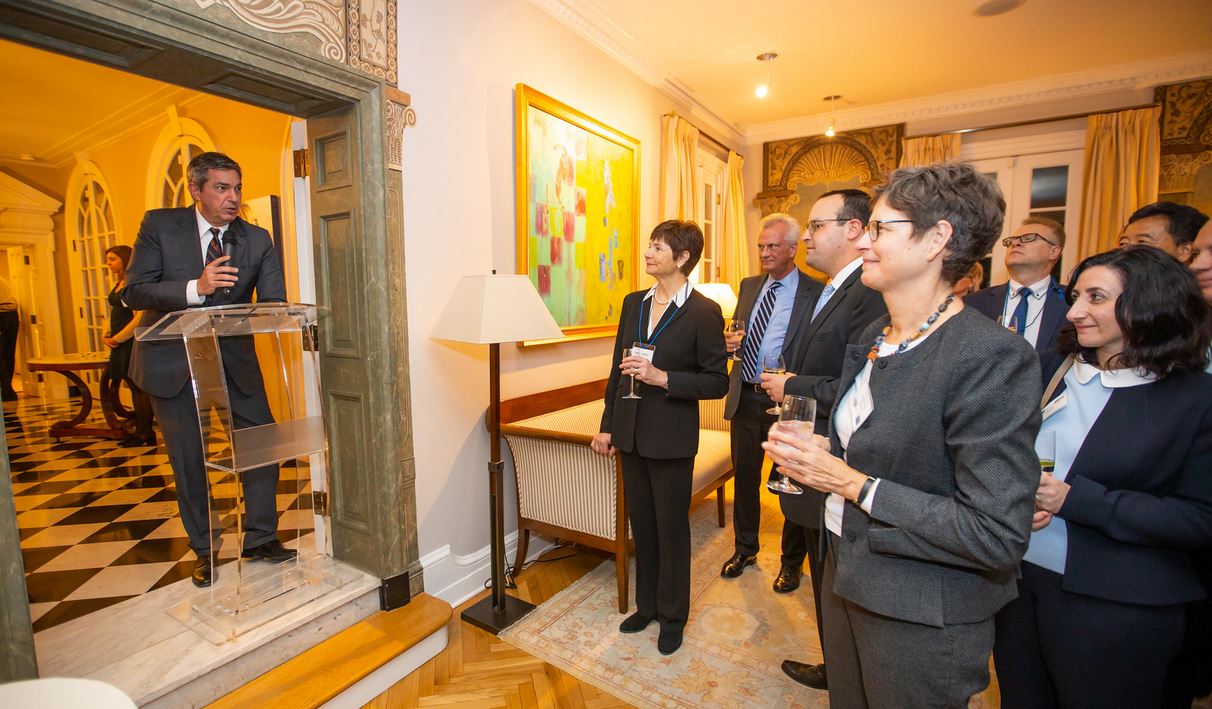 WASHINGTON, D.C. — Despite an ongoing shakeup among European Union membership, the EU will continue to be a major player in Arkansas trade and investment, according to Dan Hendrix, president and CEO of the World Trade Center Arkansas.

Hendrix was on hand Tuesday, Feb. 11, to welcome the EU’s ambassador to the U.S., Stavros Lambrinidis, as part of a Transatlantic cooperation reception.

“Continuing to build relationships with The EU leadership will be important, such as the reception hosted at the EU ambassador’s residence allowing us to engage with other EU ambassadors and trade staff,” Hendrix said. “Extending invitations to these diplomats to visit Arkansas will showcase our state.”

Hendrix, a member of the State International Development Organization, was in D.C. in conjunction with a SIDO board meeting meant to engage the U.S. Department of Commerce, the World Bank, the EXIM Bank and the SBA STEP Grant Administration to expand trade globally.

Hendrix said he also sought to help other business leaders learn more about the impact of the United States-Mexico-Canada Agreement and Phase One of the U.S.-China trade deal on Arkansas’ economy.

In Arkansas, roughly 37,000 jobs are supported annually by EU investments and EU-US trade. In 2017, exports from Arkansas to the EU amounted to $2.47 billion, according to the Delegation of the European Union to the U.S.

“As we like to say here, you cannot spell business without EU, because the European Union means business, especially for Americans,” Ambassador Lambrinidis said. “We are the two biggest, most open, most free and fair economies in the world, and we trade with and invest in each other more than we do with any other country or region. As economic development directors, you know the powerful positive impact that economic investment and trade can have on local communities.”

Major goods and agriculture commodities sent across the pond from the Natural State ranged from aerospace products ($928M) and rubber ($111M) to soybeans ($72M) and rice ($17M), according to delegation data.

Furthermore, several EU countries have invested heavily in Arkansas. Belgium-based Bekaert has an office in Rogers, where the steel manufacturer has contributed $55 million in capital and created 140 jobs.

“We have more than 115 companies in Arkansas represented by EU countries,” Hendrix said, noting that Germany (35), Ireland (30) and France (20) owned the most companies, respectively.

The aforementioned data was compiled when the U.K. was a member of the European Union. The U.K. left the EU last month following a 2016 vote in which 52% of residents supported “Brexit.”