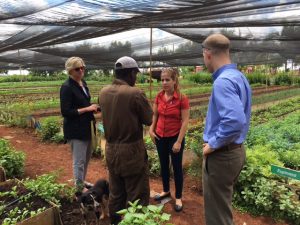 World Trade Center Arkansas led a delegation of 25 business leaders, food producers, and educators made a second visit to Cuba, starting June 26. The purpose of the trade mission was to continue discussions of potential trade opportunities. Arkansas agriculture was represented by Arkansas Secretary of Agriculture Wes Ward, faculty from the University of Arkansas Pine Bluff, the Department of Aquaculture and Fisheries, the University of Arkansas Fayetteville, the UA Division of Agriculture, as well as officials from Heritage Grain & Southern Brown Rice, Armor Seed, LLC and the Arkansas Rice Federation. President and CEO Burt Hanna from Hanna’s Candles joined the return visit as well to discuss potential investment in Cuba. Representatives from Bio-Tech Pharmacal, Vestar Capital Partners, the Rockefeller Institute, Camfil APC and Cameron Smith & Associates, Inc., along with Curt Rom, associate dean for international education in the U of A Graduate School and International Studies.

World Trade Center Havana and the Chamber of Commerce of the Republic of Cuba worked together to organize a business forum. The meeting was opened by members of the Havana Chamber of Commerce and the World Trade Center Arkansas. Maria de la Luz, Director of the Ministry of Foreign Trade and Investment and Omar de J. Fernandez, General Secretary of the Chamber of Commerce, , both spoke on behalf of the Cuban government. Wes Ward and WTCA president and CEO Dan Hendrix both spoke on behalf of Governor Hutchinson and the state Department of Agriculture. Business to business meetings followed the forum and continued for several days, along with tours of Cuban industry

The delegation also visited the Special Economic Development Zone of Mariel just west of Havana. The zone was developed in 2013 and has very favorable location and logistical conditions, especially since the 2009 invested improvements to the Port of Mariel. 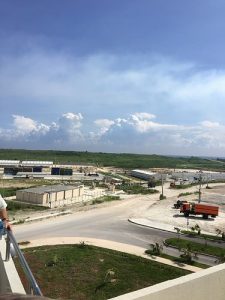 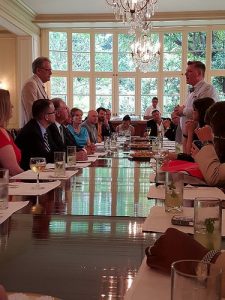 The Cuban government has given each farmer 45 acres to help them become sustainable and independent. Farm cooperatives provide an economic model for Cuban farmers. By sharing their limited resources – tools, equipment, irrigation, harvesting – they are successfully supplying fruit and vegetables to Cuban citizens from private land. The delegation learned of Cuba’s process in selling the produce back to the government and the leftover excess to the direct consumer.

Mark Cochran, UA System vice president of agriculture, is reviewing a proposal from the Instituto De Ciencia Animal (Institute of Animal Science) that would create a joint venture between both institutions. Cuba regards this industry as a national security issue for their country. Division of Agriculture faculty attended meetings regarding earlier discussion of educational exchanges.

“Creating a long lasting relationship will help both Cuba and Arkansas now and in the future”, said World Trade Center Arkansas Director Melvin Torres. “Relations between both are very strong and we feel privileged to be part of uniting the best of both worlds. We had a very productive visit and anticipate discussions will continue to progress. We will not let our relationships slow down. Our goal is to continue and develop the relationship Arkansas and Cuba want to have by trading through prosperity and peace.” 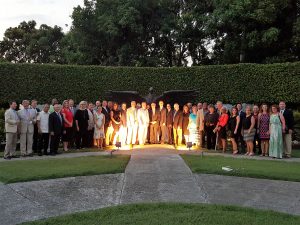 A highlight of the trip was a meeting with fellow Arkansans. Congressman Rick Crawford from Jonesboro had made plans to also lead a delegation to Cuba to learn about the country’s health care system. After learning that there was another Arkansas delegation traveling to Cuba around the same time, Hendrix, arranged for both groups to attend a reception at the residence of Ambassador Jeffrey DeLaurentis, doubling the size of the Arkansas delegation from 25 to 50.