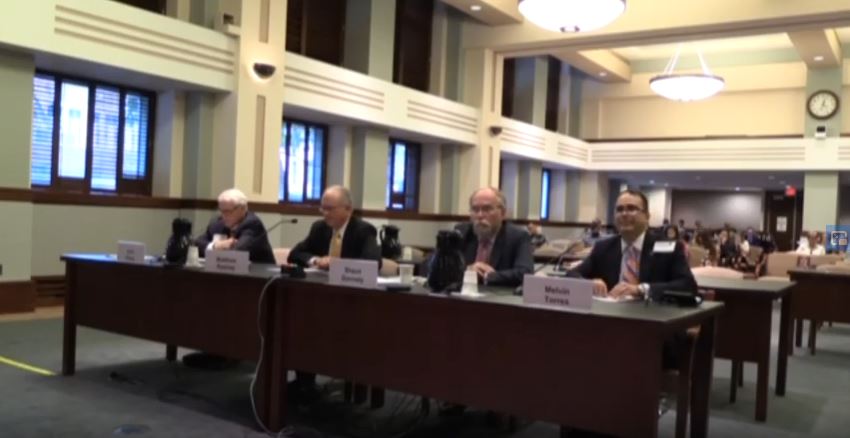 Torres presented the needs of Arkansas companies and explained how NAFTA has largely benefited the state’s economy at the NAFTA hearings.

“NAFTA has been extremely beneficial to Arkansas. We are in a unique position compared to other states of the nation as we export twice as much as we import with both partners,” Torres said. “The trade agreement has enabled Canada and Mexico to become our largest trading partners. It has led to the creation of nearly 60,000 jobs in Arkansas and currently supports nearly 100,000 jobs.”

From May 15 – 18, Torres went to Washington D.C. with several Arkansas leaders. These included Arkansas Secretary of State Mark Martin and Angela Marshall-Hofmann, who served as former trade counsel for the U.S. Senate Finance Committee and has extensive experience in the negotiation and congressional passage of trade agreements.  Martin and Marshall-Hofmann were present for trade advocacy and support.

“We have a unique opportunity to participate in the NAFTA modernization process at the NAFTA hearings,” Marshall-Hofmann said. “We can ensure continued cross-border access for U.S. goods and services as well as seek new terms that reduce cost, speed up delivery and simplify the way we do business with our most important trading partners.”

The group met with multiple agencies including the International Trade Administration, the USTR, the Ambassador of Mexico Geronimo Gutierrez, the Embassy of Canada’s trade staff and other trade officials.

“We tried to emphasize Arkansas’ unique position within NAFTA,” Torres said. “We are one of the few states that has a positive trade balance with both countries. In fact, Arkansas exports hundreds of millions of dollars more in goods and services to Canada and Mexico than we import from them. We have seen an incredible 700 percent increase in our exports to Mexico since NAFTA began. Furthermore, exports from Arkansas to Mexico are growing 3.6 times faster than exports to any other country. Our state’s success can be a model for the rest of the country.”

When the group from Arkansas presented this information to the USTR, the World Trade Center Arkansas was subsequently referred to as the success example of middle-America during the policy negotiations. Upon their return to Arkansas, the Center created a NAFTA survey to gather information on the needs and benefits to Arkansas companies.

Torres’ trip to Washington D.C. this week was to present the findings of the World Trade Center Arkansas survey and to testify on NAFTA’s benefits to Arkansas at the USTR NAFTA hearings. He also requested specific needs from Arkansas businesses for the modernization of the agreement.

You can watch Torres’ testimony below.