3rd Cuba Opportunity Summit to be held on Oct. 23 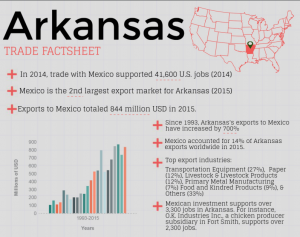 Arkansas trade with Mexico has grown rapidly since NAFTA was implemented.

“We were happy to welcome Señor Quilantán-Arenas and his wife Patricia, today,” said Dan Hendrix, President and CEO of the World Trade Center Arkansas. “This was an opportunity for us to strengthen our ties and develop a solid strategy for growing trade with one of our most important partners.”

The Consul’s mission is to represent the interests of Mexico and Mexican nationals throughout Arkansas, Oklahoma and western Tennessee, including Memphis. Quilantán-Arenas’ role as Consul means that he regularly works and interacts with Arkansans.

“The relationship of Arkansas and Mexico is growing exponentially,” he said. “Many jobs in Arkansas depend on the free trade agreement. We have a wonderful economic relationship.”

“One of the most important messages I can convey is that we have 25 years working within the legal framework of NAFTA,” he said. “We can see that this trilateral element has produced a wonderful, win-win resource for everyone involved. There is enough evidence that NAFTA and global trade produces benefits to everyone.”

“History has shown us that peace and prosperity are achieved through trade,” said Melvin Torres, Director of Latin American Trade for the World Trade Center Arkansas.

“So we would like to lead a trade mission to Mexico and receive one from Mexico this year. At the same time, we want to grow the educational cooperation between our University and similar institutions in Mexico.”

Torres says it is imperative that we continue to foster the positive relationship between Arkansas and Mexico.

“This way we can cement a long-lasting partnership that will only grow through this natural and honest friendship.”