TOGETHER CLINGING – the story of Chris and Sherry Tedder

The Cuba Advantage: Can Cuba become the new China?

Melvin Torres, Director of Latin American Trade for the World Trade Center Arkansas explains the Cuba Advantage. See the article as it appears in the April 2017 issue of Cuba Trade Magazine.

With market volatility at its lowest in history as shown by Treasury bonds and dollar stability, the U.S. stock market has grown at a historic pace in the last 90 days.

With the new trade policy changes being discussed by Congress and the President, trading materials needed to manufacture products has become a topic of great conversation in Arkansas.

Arkansas companies that import essential component materials for manufacturing which are impossible to produce in the U.S. are in a better position with a stronger dollar and purchasing power.

The other proposal that the President is contemplating is a Border Tax of 35 percent on any imported product from companies that move their manufacturing facilities outside the United States. 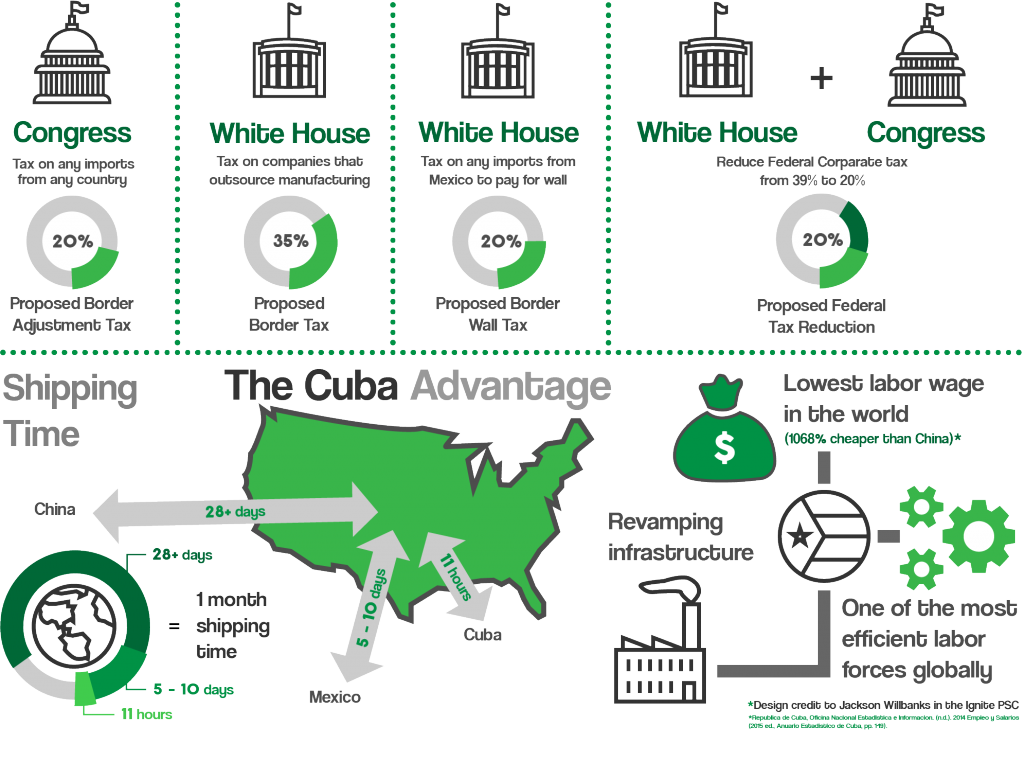 When you factor in shipping times, labor wages, the infrastructure revamps and the different trade and tax proposals, the Cuba Advantage becomes very clear. Design credit to Jackson Willbanks of the Bentonville Ignite Professional Studies Center.

In addition, the 20 percent “Wall Tax” on all imports from Mexico is being proposed to pay for the border wall between Mexico and the United States.

Although it is unclear whether all three taxes will be added as a total or if one or the other would take place depending on the U.S. Congress and the President, as of today, potential increases ranged from 20-55 percent on world imports. This figure will depend on1:

In the case of Mexico, any imports from our neighboring country to the United States could face an additional 20 percent Wall Tax on all goods for yet undetermined amount of time. This would effectively place a total tax of at least 40 percent and up to 75 percent on all goods imported from Mexico depending on how and if the government decides to implement it.

On the other hand, the proposed decrease in corporate taxes from 39% to 20% would help Arkansas companies offset additional costs and import taxes.

Positioning Cuba as a new China

Could this complex new system and dramatic tax revamp position Cuba as a new China? When the trade negotiations are finalized and the embargo is lifted, Cuba may very well become the preferred country to import goods impossible to produce in the United States. This Cuba advantage is true even with the embargo still in place as there are currently bills proposed in Congress to ease some export and financing restrictions with Cuba, mostly driven by Arkansas’ Rep. Rick Crawford and Sen. John Boozman.

“It is widely recognized that Cuba is an important consumer of rice, grains and poultry in the region and that Arkansas is the largest producer of rice in the United States,” said Angela Marshall-Hofmann, former trade counsel for the Senate Finance Committee and current president of World Strategies LLC. in Bentonville. “Arkansas is also one of the primary providers of other agricultural products such as poultry.”

Marshall-Hoffman was responsible for agriculture and trade policy decisions that included China and the normalization of Cuban relations in addition to multiple trade agreements supporting U.S. exports. She says that as the relationship between Cuba and United States evolves, trading opportunities for Arkansas manufacturing and service companies will rise from integration into the regional market.

“Additionally, Arkansas companies are always looking for ways to innovate and be more competitive,” she said. “In this instance, Cuba, with its proximity to the U.S. and its growing investment in infrastructure, is perfectly positioned to help Arkansas companies grow.”

With an average monthly wage of $28* converted depending on the industry, Cuba has the lowest labor wage in the world11 2. This would translate to $0.93 per day or $0.11 per hour in an eight-hour work day, although Cuban law provides for a maximum of 8.8 hours a day10. Furthermore, Cuban labor is one of the most efficient globally3.

Efforts to revamp infrastructure are on the way as one top Cuban official confirmed last November. Major airlines are already flying directly from major cities in the U.S. to different airports in Cuba including the Havana airport. On March 9, 2017, Havana welcomed the first Norwegian Cruise Line vessel from the U.S.

The island nation has a labor force of 5.14 million and a total population of 11.25 million. It is the largest island in the Caribbean, comparable in size to the state of Pennsylvania. Centrally positioned 93 miles from the United States and 130 from Mexico, the island is strategically located to send and receive shipments through the new deep sea Port of Mariel to the rest of the world.

Bringing it all together: the Cuba Advantage

Once production efficiencies, proximity to Arkansas, current infrastructure improvements and the special economic development zone are all factored in, Cuba’s average monthly salary diverges sharply from all main manufacturing markets and looks highly attractive to Arkansas companies. Compare Cuba’s low $28 per month with the average monthly salary of $3276 in China and $3227 in Mexico and the Cuba advantage becomes as clear as day.

Furthermore, the shipping advantages of Cuba range from sea shipping times of 11 hours or less9 compared to a few days by land from Mexico and up to 28 days from China. This recipe might just be the one companies overseas are looking for to counteract the tax effects being proposed on imports that cannot be manufactured or produced in Arkansas or the U.S. The cost savings of the Cuba advantage can certainly be passed along to consumers by U.S. manufacturers that are forced to import goods otherwise impossible to produce nationally. This would also benefit off-season imports of products such as tropical fruits and vegetables that are all organically grown in Cuba by necessity due to the lack of pesticides.

For companies looking to be competitive through the newly proposed set of import taxes or small businesses trying to stay afloat throughout this tax overhaul, the Cuba advantage could be the answer to keep U.S. and Mexican manufacturers competitive and their doors open for business for products and components not produced in Arkansas or the U.S.

Sam Cushman of the World Trade Center Arkansas and Angela Marshall-Hofmann contributed to this article with special thanks to Sarah Bartmier and Jackson Willbanks in the Bentonville Ignite Professional Studies Center.