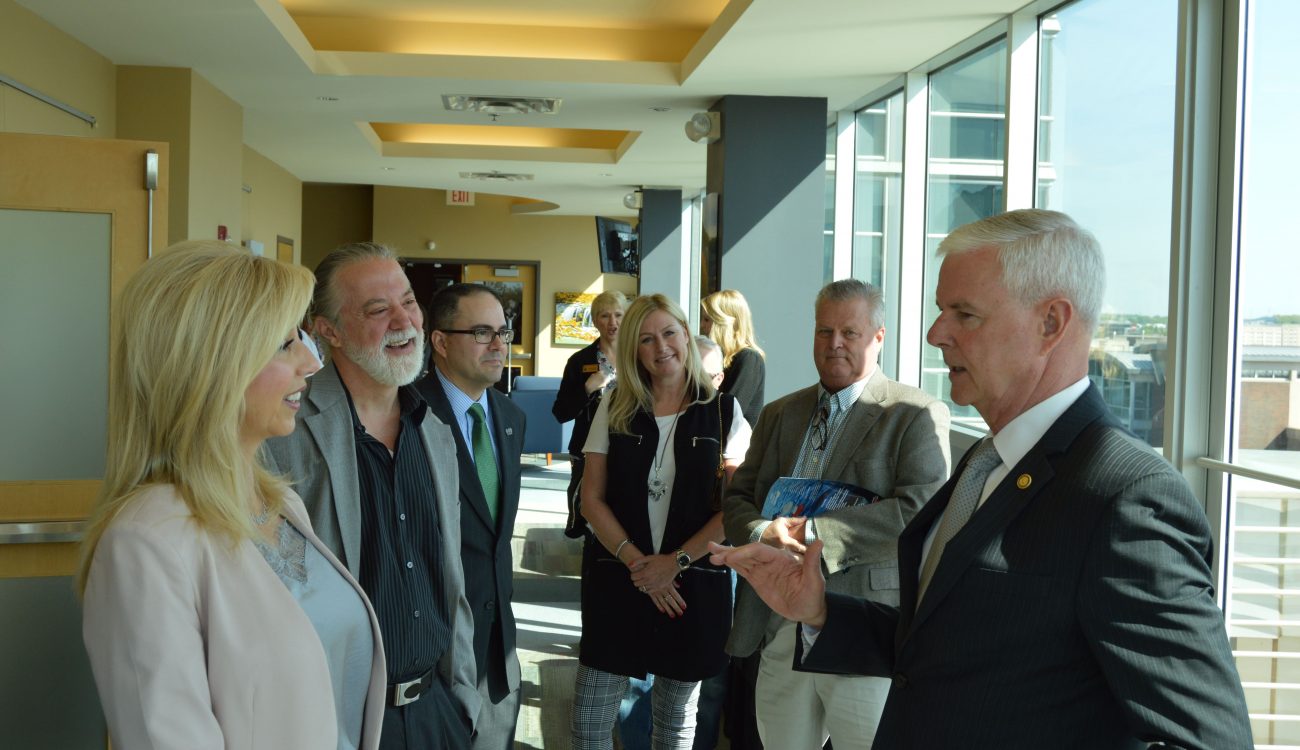 Rep. Steve Womack visits with Tasha Sinclair of Lycus, Ltd.,Flip Kindberg of SkyGenie and Steve Cherry of Kanooler Products before the trade briefing at the World Trade Center Arkansas in Rogers.

companies on USMCA, trade at World

U.S. Rep. Steve Womack gave Arkansas companies a briefing on the United States Mexico and Canada Agreement (USMCA) and the North American Free Trade Agreement (NAFTA) at the World Trade Center Arkansas on Monday, April 22, 2019. The USMCA was signed by the leaders of Canada, Mexico and the United States on Nov. 30, 2018 to replace NAFTA and must still be ratified by the legislative bodies in each country.

Congressman Womack shared the sentiment that while progress has been be made, there is still more work to be done to get the USMCA over the finish line. He noted that, “We continue to put pressure to move the plan forward, but timing [for bringing the legislation to a vote] will be determined by the leaders of the respective chambers – in our case Speaker Pelosi and in the Senate’s case Leader McConnell.”

The briefing was attended by multiple Arkansas companies that recently returned from a trade mission to Mexico led by the World Trade Center. These companies included Lycus Limited of El Dorado, Sky Genie of Fort Smith, CreekKooler of Rogers Arkansas and Metova of Fayetteville. Members of the press were also in attendance.

“The USMCA will have a large impact on the way companies conduct international business,” said Melvin Torres, Director of Western Hemisphere Trade for the World Trade Center Arkansas. “Canada and Mexico are Arkansas’s biggest trading partners so this briefing was a valuable opportunity for companies to listen to the Congressman, ask questions and have their concerns addressed.”

Torres opened the briefing with a presentation on NAFTA and the USMCA before introducing Womack to speak. Torres covered key provisions of the USMCA and focused on the strong increase in state exports to Mexico and Canada since NAFTA was implemented.

Due to the current uncertainties regarding steel and aluminum, Womack says there are currently mixed reactions to the USMCA among members in the House of Representatives. He reiterated that there are strong benefits to trade.

“Agriculture is vital to Arkansas and the benefit to producers in the state is pretty profound. We have to have access to those markets,” he said. “It’s vitally important to the trading partners in our region and to Arkansas farmers and ranchers – I want to see this plan implemented.”

During the briefing, Womack also spoke briefly on current legislative issues, bipartisanship and the need to match education and training with future demands of the labor market. In addition to trade related topics, workforce development was also a key concern for participants.