Spanish classes for the business professional

Small Business in Arkansas Covering a Lot of Territory 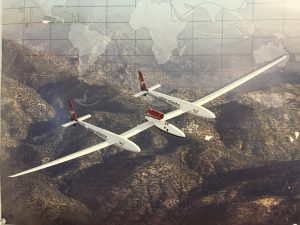 When talking about his company and the products it provides, CEO Andrew Barker of TruTrak Flight Systems in Springdale, Arkansas, exudes enthusiasm and pride. He refers to himself a “true airplane nerd” and loves his job. TruTrak develops and manufactures autopilot systems and safety features for light sport and experimental aircraft all over the world.

Barker was offered a full time position with the company as Operations Manager back in 2000. He was still a student at the University of Arkansas at the time and didn’t know if he could handle both the work load and classes. But taking the advice and encouragement from his favorite professor, Rick Couvillion, he made the best of that opportunity. It took him a little bit longer to get that degree in mechanical engineering in 2004 but it paid off. Barker continued growing with the company in different capacities and is now owner and CEO.

Along the way, the company’s autopilot systems have found their way into some impressive cockpits. Back in 2005, the experimental plane, the Virgin Atlantic Global Flyer, set the world record for the fastest nonstop unrefueled flight around the world. That plane relied on the autopilot system made by the small northwest Arkansas company.

Swiss pioneers in technology research and development are using equipment from TruTrak in their experimental plane Solar Impulse 2 that is navigating around the globe completely on solar power. Located in Payerne, Switzerland, Solar Impulse, has been working on this project for many years. You can follow the exploration at http://www.solarimpulse.com/

The World Trade Center Arkansas accompanied Barker to an aerospace show in Friedrichshafen, Germany back in 2015. During that trade trip, his company was introduced to current partner, Levil Technology/Aviation located in Oviedo, Florida. At this show, Levil and TruTrak conceptualized a break-through new autopilot and envelope protection system that utilizes small lightweight off the shelf RC servos to fly the aircraft.

There are domestic shows such as EAA AirVenture in Oshkosh, Wisconsin, for small to medium-sized aerospace manufacturers to attend and show their products. But international trade shows were an unexplored venture for TruTrak until the opportunity was introduced by the World Trade Center Arkansas. With 2016 STEP grant funds, the center assisted TruTrak in making a return trip to the Friedrichshafen show and EBACE (European Business Aviation Convention) in Geneva Switzerland.

Barker credits TruTrak’s recent growth to the assistance from the World Trade Center and the trade shows they are attending together. When asked about the company’s success and how it could affect the state, he replied, “Getting our face out there at the international trade shows is big, it really makes a difference. They help us get the product in the hands of customers that otherwise wouldn’t be able to actually see the product. The World Trade Center helps make that possible. As we grow, this means more jobs – not only for our company but for the other companies that we work with, develop together, and do installations for us.”