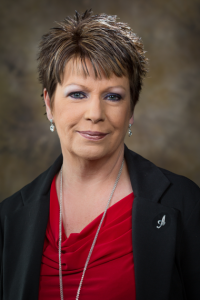 ROGERS — Trish Watkins, the director of grants, finances and human resources at the World Trade Center Arkansas, was honored recently for 35 years of service with the University of Arkansas.

Watkins, who began her tenure with the U of A in 1985 as an administrative assistant, now works with federal agencies like the Small Business Administration to secure millions of dollars for Arkansas’ small businesses.

“These grants provided funding for many of Arkansas’ small businesses to expand their export market access, increasing job growth and retention while boosting economic development in the state,” said Dan Hendrix, the Center’s president and CEO.

“Trish is a valuable member of the team and executes her responsibilities with high performance and success.”

Watkins is also active in several campus affairs. She has served six terms as chair of the U of A staff senate.

During her tenure as chairwoman, Watkins guided the senate in successfully implementing the optional short-term disability plan as well as the RazorGifts Holiday Gifting Program to help staff who have financial need. She also helped launch the annual Staff Appreciation Week.

“It is an absolute pleasure to work for the World Trade Center Arkansas, and has been one of the most rewarding positions I have held these past 35 years,” Watkins said.

“The team at the WTC Ar is the best, and we have the greatest leadership with Dan Hendrix.  I have met some of the most fascinating people, and enjoy working with so many wonderful small businesses in the state. I look forward to what the future holds for the Center, the friendships I have made and those to come, and to continue to working with the small businesses in our great state.”