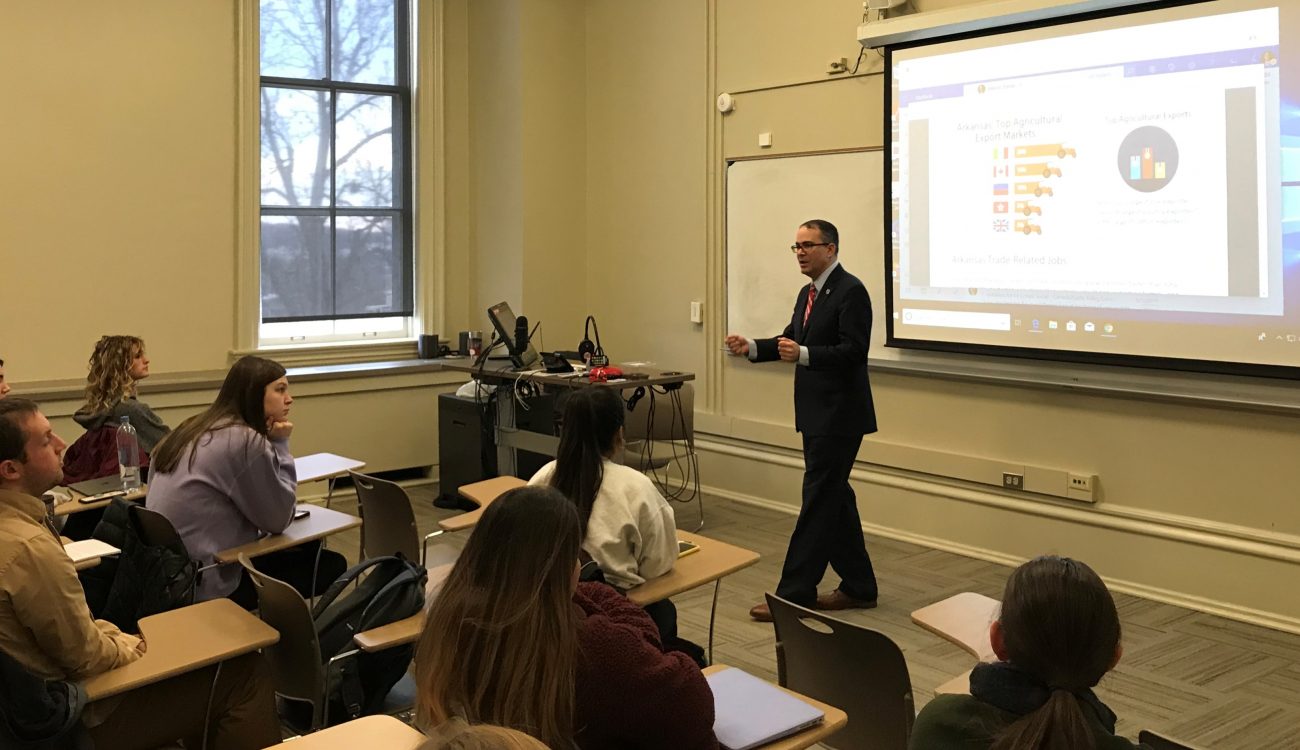 Melvin Torres, director of Western Hemisphere trade at the World Trade Center Arkansas, speaks Tuesday, Dec. 3, to a group of U of A political science students about the thriving trade relationship between Arkansas and Mexico.

FAYETTEVILLE — Mexico could equal and may overtake Canada as Arkansas’ top customer in the next few years if the Latin American nation’s import patterns continue, according to Melvin Torres, director of Western Hemisphere trade at the World Trade Center Arkansas.

In 2018, Arkansas exported $870 million in goods to Mexico, which accounted for 14% of all exports, according to the Center’s 2019 report on jobs and trade.

The hard work of Arkansas’ farmers aided Mexico as well, with the country accounting for the majority of the state’s agricultural exports at 23%.

The North American Free Trade Agreement, or NAFTA, has also played a favorable role in establishing a thriving trade relationship between Arkansas and Mexico, Torres said.

Signed in 1994 by leaders from Canada, Mexico and the United States, NAFTA “tore down most trade barriers separating” the three countries, according to the Associated Press.

Exports to Mexico in 2018 even increased slightly — by 2.3% — despite an overall dip in exports to the Western Hemisphere following new U.S. tariffs.

Eric McLain, a senior from Fort Smith, said he was aware of NAFTA’s impact nationally, but learned more about the agreement’s affect on Arkansas’ economy thanks to Torres.

“The fact that they’re still working together — despite the tariffs — is very interesting,” McLain said.

However, a revision to NAFTA, known as the U.S.-Mexico-Canada Agreement, has been in the works since last year, the AP reported.

Despite under-performing in areas of inclusion and poverty reduction, the World Bank described Mexico as a “prime destination for investment” in its overview of the country.

“Mexico is a country with significant opportunities and potential,” the bank noted.

“Its macroeconomic stability is the cornerstone to foster investments and a growing private sector.”

Torres was invited to speak by Dr. Xavier Medina, who teaches a class on Mexican politics that touches the country’s role in North American relations.

“(Torres) helps students find Arkansas’ place in global trade, but also how it impacts the local community in Mexico.”