NAFTA Negotiations Developments as of February 26. 2018

Arkansas Exports to NAFTA Countries Increased by 14 Percent in 2017

Canada and Mexico, respectively, were Arkansas' two largest trade partners in 2018. The two countries accounted for $2 billion in goods and support 120,000 in-state jobs.

“Total exports of goods for Arkansas increased by nearly 11 percent this past year to $6.3 billion,” said Melvin Torres, director of Western Hemisphere Trade at the World Trade Center Arkansas. “This is one of the highest increases in the history of the state. The increase was mostly driven by Canada and Mexico’s dramatic increase in imports during 2017.”

Canada and Mexico are Arkansas’ largest trading partners by billions of dollars, and trade with the two countries supports more than 115,000 jobs. 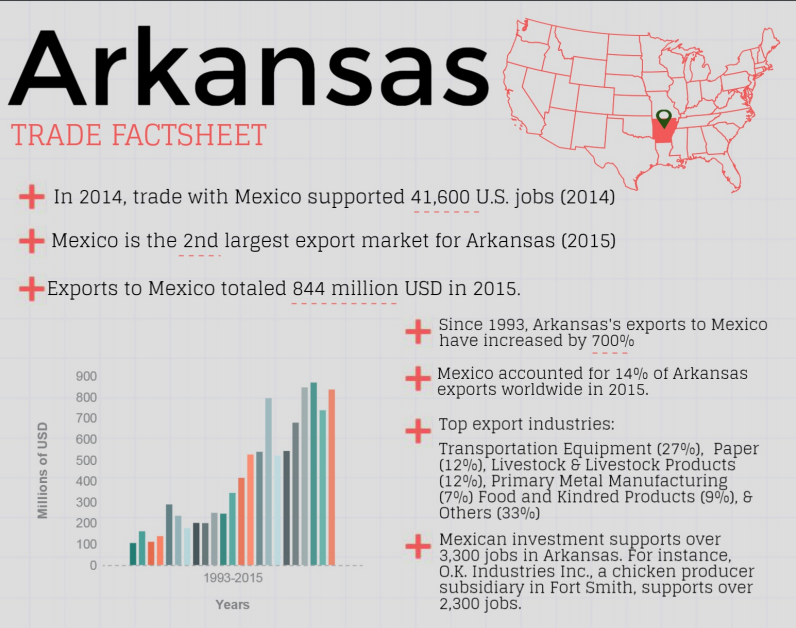 Since 1993, Arkansas exports to Mexico have increased by 700 percent.

“Last year was an extraordinary year for Arkansas exports to NAFTA countries.” Torres said. “Overall, exports to Canada and Mexico have increased by 400 percent and 700 percent respectively since NAFTA was implemented in 1994. This latest data release shows that the Arkansas economy depends substantially on NAFTA exports.”

According to the latest data reports from the Census Bureau, in 2017 exports from Arkansas to Mexico reached the highest point since 2014.  Year-over-year exports to Mexico of goods alone increased by nearly 24 percent from $685 million to $847 million. Arkansas exports to Mexico are increasing 3.6 times faster than exports to any other country.

“Mexico’s stunning and rapid growth is accelerating Arkansas export increases to both partners,” Torres said. “These increases reflect the overall trend since NAFTA was implemented as well as the intense efforts of the World Trade Center Arkansas during the past two years. Our increased efforts to engage with both private and government partners have brought synergy and collaboration with both countries.”

This information underscores the importance of NAFTA to the state’s economy as the seventh round of NAFTA negotiations began last Sunday. Negotiations began following a federal notice issued by the U.S. Trade Representative in May 2017 seeking views from American businesses regarding the trade agreement. The World Trade Center Arkansas submitted comments and publicly testified in Washington, D.C., on behalf of 150 Arkansas companies in response to this federal notice on July 2017.

On Jan. 16, Arkansas Gov. Asa Hutchinson spoke at the World Trade Center Arkansas during “Arkansas and NAFTA.” Both Mexico and Canada were represented by their consul generals at this event. The governor and other state leaders also spoke at agriculture conferences and emphasized the importance of NAFTA.

“Overall, Arkansas and its leaders at state and federal levels recognize that NAFTA is critical to our state,” Torres said. “We understand the need for updates in areas like eCommerce and intellectual property but overall, NAFTA benefits Arkansas companies that export and their workers. Employees in exporting companies earn an average 18 percent more than those in non-exporting companies. All of Arkansas percentage indicators outperform the U.S. national average on NAFTA exports.”