Tan and Thomas Represent at the General Assembly in Algeria

For the first time in our state’s history, the World Trade Center Arkansas welcomed three officials from the Cuban Embassy as they traveled from Little Rock and made their way through northwest Arkansas. Juan Lamigueiro, Deputy Chief of Mission was accompanied by Yusel Arias Cruz, Ministry of Foreign Affairs and Karin Diez, First Secretary.
Their business in Little Rock included participation in the launching of the national organization Engage Cuba, http://www.engagecuba.org/arkansas and discussions of lifting trade barriers with Arkansas state leaders.
Dale Bumpers College at the University of Arkansas Fayetteville received the group and exchanged views on poultry production, poultry disease and food safety. They were impressed with university research and welcome future cooperation between U of A and Cuban universities. Cuba is very interested in purchasing Arkansas’ food products not only for Cuban citizens, but to support their exploding tourism business. They are currently receiving shipments of chicken from Simmons Foods and Tyson Foods.
Long grain rice is the next sought after agricultural product from Arkansas if the embargo can be lifted. WTC Arkansas helped to identify companies that would be interested in investing in Cuba and meetings were held in the northwest Arkansas offices. Some of the continued discussions were a direct result from the first trade mission to Cuba back in October 2015, led by Governor Hutchinson.
The Center is organizing a second trade trip to Havana for June 2016. 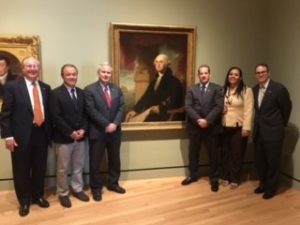 Dan Hendrix, Boon Tan, Juan Lamigueiro, Yusel Arias Cruz, Karin Diez, and Melvin Torres at Crystal Bridges; somewhat symbolic standing by the portrait of Washington signing the Jay treaty in 1795. The treaty encouraged peaceful trade between the United States and Great Britain. Now, Cuba and the World Trade Center Arkansas are working together trying to enable US trade with Cuba as depicted in the symbolic picture.