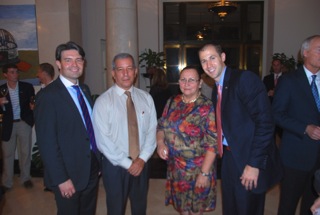 There was an air of anticipation at the U.S. Ambassadors’ residence in Havana, Cuba, as each guest was warmly greeted at the front door by the new U.S. Ambassador, Jeffery DeLaurentis, and his wife. It intensified in the residence’s majestic rooms, where visitors from Arkansas shared refreshments, conversation and polite laughter with diplomats and Cuban officials.

The reception, held in honor of our Arkansas World Trade Center delegation, marked the first time in 55 years that a U.S. Ambassador had welcomed members of the Cuban government into his home. When two nations restore diplomatic ties, as the U.S. and Cuba are doing, it is accomplished by real people who lead normal lives.

That is why Arkansans from agriculture, industry, education, business and government had been invited to a reception at the Ambassador’s residence on this evening in late September. Their individual stories were the human component that made this evening historic. Normalization of diplomatic relations will afford opportunities for the people of Arkansas and Cuba to forge ahead in constructive engagement, to the benefit of both our nations.

Cuba is important strategically to Arkansas because of the potential export market. Rice and poultry are staples in the Cuban diet, and for a number of years Cuba has purchased Arkansas products on a cash basis. Cuban merchants want to purchase more, but first Congress must act. Fortunately, Arkansans are providing needed leadership on the issue.

The lack of U.S. agricultural credits is not the only impediment to the sale of Arkansas products. Shortly after the Avian Flu out break in the U.S. earlier this year, the Cuban government moved quickly to ban imports of poultry from any state that was affected. Although the threat of Avian Flu has been eradicated on the only Arkansas farm affected, poultry exports to Cuba from the state remained blocked.

We were able to raise the issue in meetings with Rodrigo Malmierca, Cuba’s Minister of Foreign Trade and Foreign Investment. Our delegation assured the minister that Arkansas poultry wasn’t at risk and the quality was second to none. Malamierca listened and helped set in motion a process that in a few weeks ended Cuba’s ban on Arkansas poultry imports.

There are other reasons to be encouraged. Over the past few years the Cuban government has gradually loosened controls over its economy. As a result, the entrepreneurial spirit of the Cuban people has begun to flourish. Numerous Paladars, the family-owned restaurants, now serve exquisite Cuban fare. Art galleries, bed and breakfasts, clubs and barber shops are part of Cuba’s new market economy.

We left Cuba hopeful and optimistic. However, we must be mindful that our focus is not limited to trade and investment. Commerce undergirds our continued push for freedom and self-determination for the 11 million Cubans who make the island their home.

I developed a real love and appreciation for the Cuban people – they are wonderful. I’m encouraged by numerous signs that lead me to believe our two countries can actually build a relationship based on mutual appreciation and mutual interest.