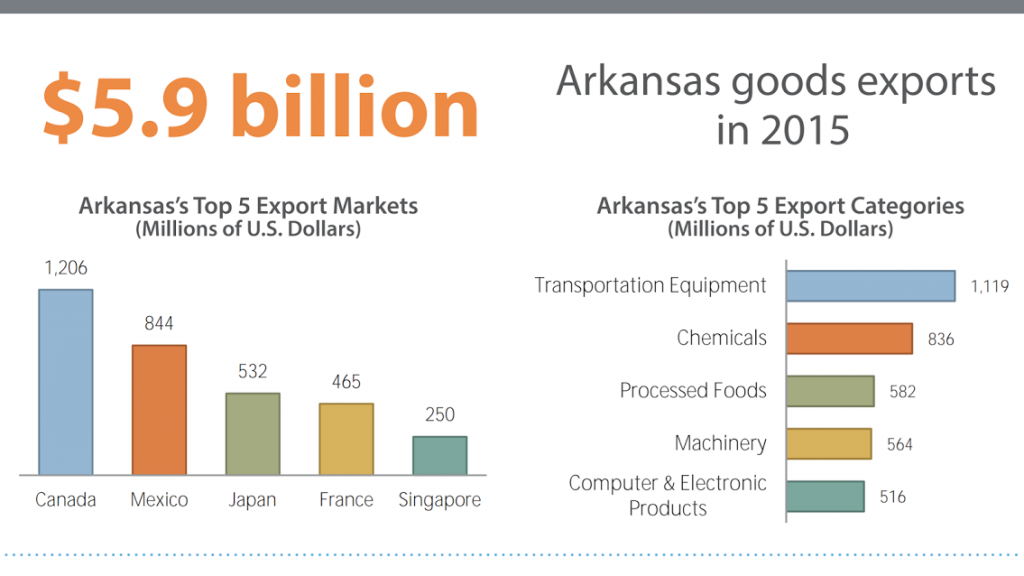 Dec. 9, 2016 – The strength of the Arkansas economy in the global marketplace gives Arkansas companies an edge on providing advice on trade policy.

“There is one country that is the most significant trading partner,” said Angela Marshall-Hofmann, former trade counsel for the Senate Finance Committee and current president of World Strategies, LLC. in Bentonville and member of the Board of Advisors for the World Trade Center Arkansas. “That is Mexico. Mexico is the single largest trading partner – not just in food – but also for the service industries and light manufacturing.”

“Since the signing of the North American Free Trade Agreement (NAFTA),” Marshall-Hofmann said. “Arkansas exports to Mexico have increased 700 percent.”

According to Melvin Torres, the director of Latin American trade for the World Trade Center Arkansas, the state’s exports to Mexico are growing 3.5 times faster than exports to any other country.

“There are significant industries that we manage with Mexico,” Torres said. “For example, certain aircraft parts for companies are manufactured by Mexico for Arkansas companies. Arkansas companies use these parts in their manufactured products, then turn around and sell a more complete product to Mexico. This is a good example of what our symbiotic trade relationships look like.” 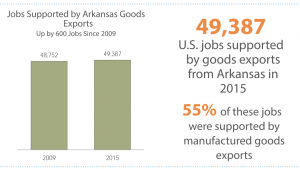 “Outside their US operations, Arkansas corporate giant Walmart has its largest global retail presence and sales in Mexico,” Torres added. “There are over 2,300 stores that sell quality American products to Mexican consumers.”

In addition to Mexico, the significance of Arkansas’ trade relationship with Canada is underscored by the fact that $1.2 billion of goods were exported from Arkansas to Canada in 2015, according to the United States Census Bureau.

This means that a consequential portion of Arkansas’ economy is

sustained by the ability to freely engage in trade with global partners. In 2015, nearly 50 thousand jobs were supported by exported Arkansas goods.

“Those stats are about five days old,” Torres told Talk Business and Politics. “In just that amount of time we see Murphy Oil win a bid to deep sea drill off the coast of Mexico and Wal-Mart plans to invest $1.3 billion into its Mexican business unit Walmex over the next three years. We know from these two big announcements trade with Arkansas will go a good bit higher,” Torres said.

Free trade agreements (FTAs), such as NAFTA and the currently proposed Transpacific Partnership (TPP), which seek to establish rules of the road and remove barriers to trade are a boon to the economy, especially to small medium enterprises (SMEs) who may lack the resources to overcome trade barriers that large enterprises do. 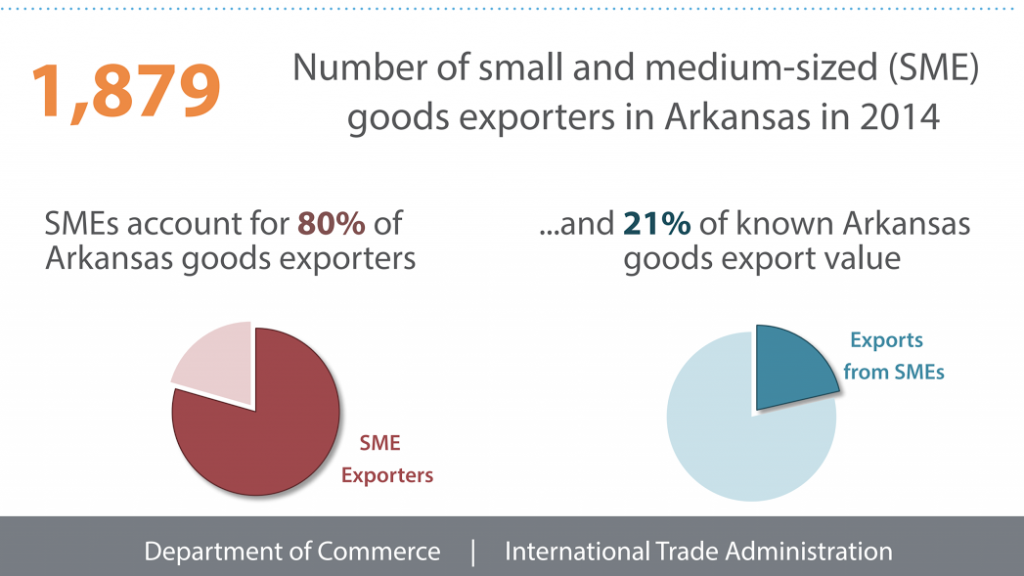 80 percent of Arkansas goods exporters are small businesses. These exporters contribute to nearly a quarter of the known value of Arkansas exports.

“In the context of TPP, it is our first opportunity to significantly improve some of the business conditions in international trade,” Marshall-Hofmann says. “Just imagine what we’ll be able to do to grow our business and create jobs with an agreement that opens new countries to Arkansas goods, eliminates tariffs – making our products more competitive – and reduces costs while simplifying the export process.”

William Burgess, vice president of operations for Power Technology Inc. in Alexander and chairman of the Arkansas District Export Council, says an agreement like TPP would mean a reduction in tariffs for his company. Power Technology Inc. specializes in designing, developing and manufacturing a wide range of laser products for multiple industries. Their top export region is in Asia.

“On day one of the agreement we would see our tariff in Canada drop from 6.5 percent to zero,” he said. “In Chile, it would drop from six percent to zero. It helps us compete on a more level playing field and the harmonization of product regulations would be very helpful to us.”

According to Marshall-Hofmann, TTP is the first major agreement to have a special chapter dedicated to small business that recognizes and reduces the cost of complex licensing, labeling and distribution challenges. TPP also includes intellectual property provisions that ensure ideas are protected from infringement and creates a more level playing field between the countries that participate in the agreement, she said.

“A little-known fact about TPP is that it is an agreement that unlocks huge potential for growth in services,” she said. “These include ecommerce, a rapidly growing opportunity for small-business to access global customers.”

According to Beth Keck, the practitioner-in-residence for China Studies for the Johns Hopkins University School of Advanced International Studies and member of the Board of Advisors for the World Trade Center Arkansas, many estimations see China as having the world’s largest gross domestic product by 2030. Furthermore the Asian Pacific is the most dynamic economic region in the world, she says.

Sources such as Bloomberg and the U.S. Department of Agriculture’s macroeconomic projections from 2015 project China with highly accelerated growth. China is already moving to negotiate the Regional Comprehensive Economic Partnership (RCEP), a rival to the proposed TTP which would omit the United States, with 10 members of the Association of South East Asian Nations (ASEAN). 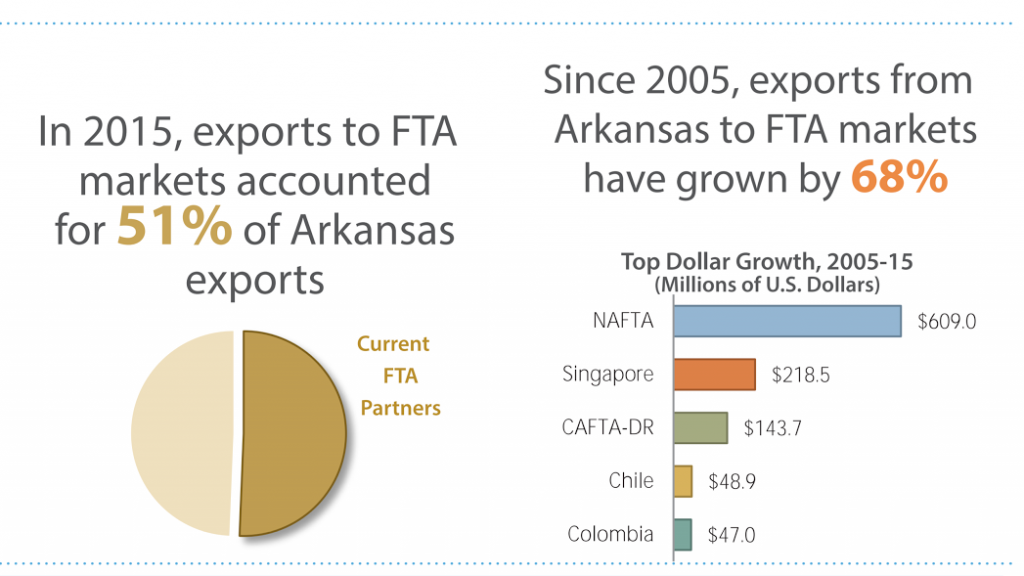 More than half of the target export markets were free trade areas.

After the announcement of U.S. president elect Donald Trump’s intention to withdraw from the TTP, countries like Japan that were previously involved in TTP negotiations are now looking at RCEP.

Companies in Arkansas, such as Tyson Foods, are focusing on Chinese markets and are devoting significant efforts to expanding their business ventures into the region.

“In terms of trade, trade with Asia is an important income generator for Arkansas,” Keck said. “For the state to remain competitive, we need to have engagement.”

Arkansas and the future of trade

Arkansas’ economic dependence on international trade means that the state is in a strong position to influence potential changes to NAFTA, to reinforce the benefit of TPP, and be involved in future trade activity.

“Arkansas is clearly a net beneficiary from global trade,” Marshall-Hofmann said. “From its exports to its companies investing and growing around the world, with these deep business relationships, our companies are very well-positioned to be wise counselors as trade policy is shaped in the new Congress.”